Cholangiocarcinoma (CCA) arises from the malignant proliferation of cholangiocytes, the epithelial cells lining the biliary tree, and is characterized by a bad prognosis and poor response to current therapies. CCA may emerge at any portion of the biliary tree and includes a group of tumors largely heterogeneous from epidemiologic, morphologic, biologic and clinical point of view. CCA is currently classified as intrahepatic (IH-CCA) or extrahepatic (EH-CCA), the second-order bile ducts acting as the separation point (1,2). The EH-CCA is comprised of the perihilar form (Klatskin tumor) and distal form where the separation point being posed at the level of the cystic duct. The distinction between IH- and EH-CCA has become increasingly important, as the epidemiological features (i.e., incidence and risk factors), the biologic and pathologic characteristics and the clinical course are largely different (1,2). 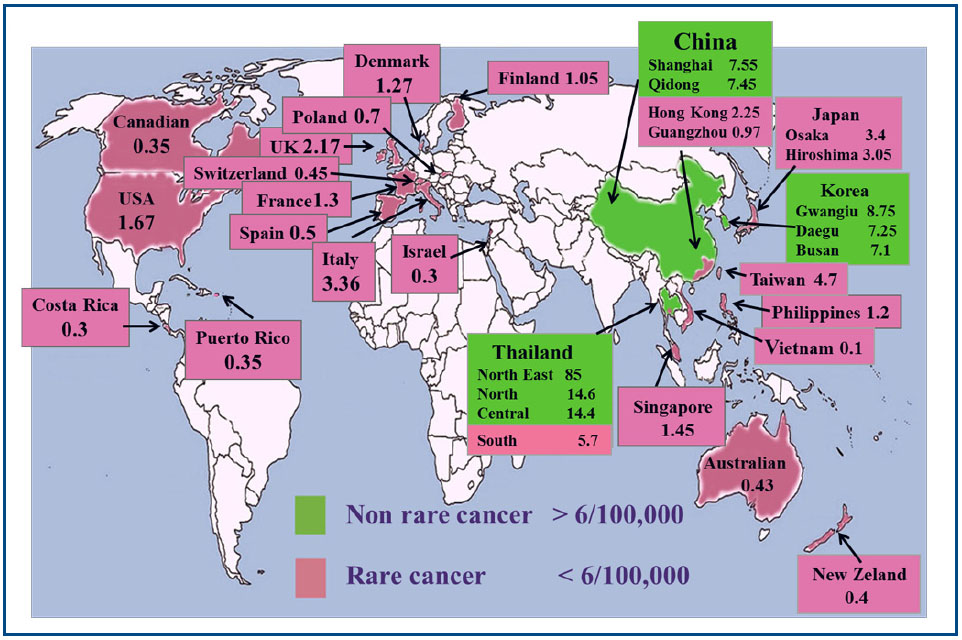 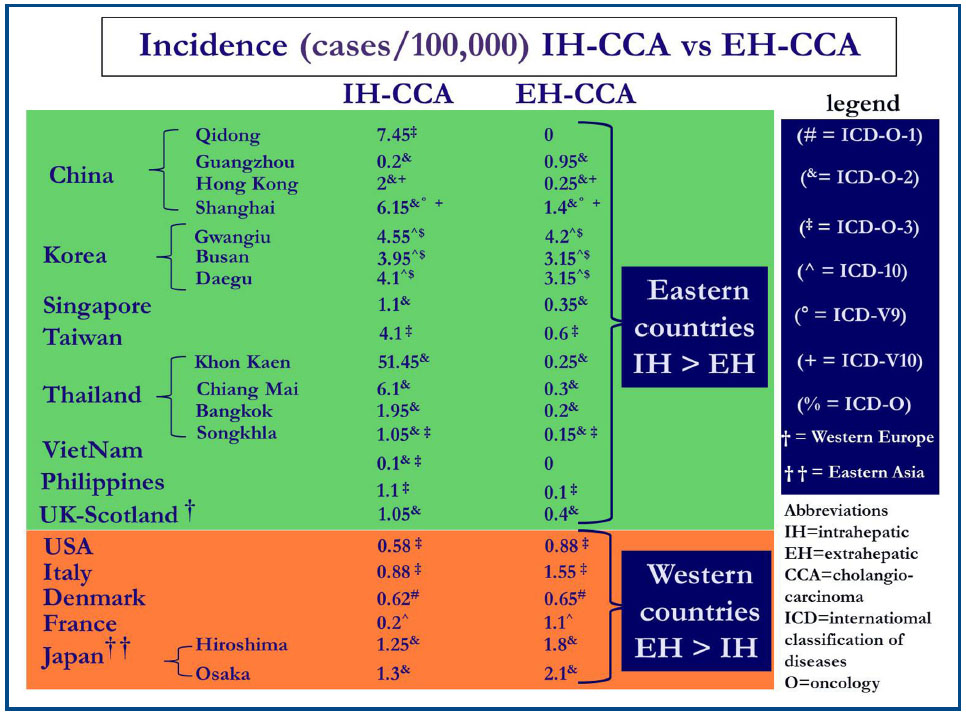 Recent studies further stressed the concept of CCA heterogeneity. Nakanuma et al. recently proposed a new classification of CCA taking into consideration human hepatic stem cells niches and the pathological similarities between biliary and pancreatic neoplasms (23). The authors classified IH-CCA into: (I) bile ductular type or CLC; (II) intraductal neoplasm type; (III) conventional (bile duct) type and; (IV) rare variants (23). CLC is thought to originate from canals of Hering/bile ductules where human hepatic stem/progenitor cells (hHpSCs) are located. Komuta et al. showed that this subtype of CCA is mainly composed of CLC areas showing small monotonous and/or anastomosing glands, strongly positive for keratin (K) 7 and K19, with tumour boundary being characterized by HCC-like trabecular area and with some cases expressing CCA areas with scarce mucin production (24). Comparison of CLC with K19-positive HCC and with combined HCC-CCA indicated a high homology (24). The evidence that IH-CCA and EH-CCA may be dissimilar tumours is supported by the recent discovery that, in vitro, they express different cellular proteins and have different cellular shape, doubling time, chromosome karyotype and chemosensitivity (25). Similarly, researchers from France showed that perihilar CCA express higher levels of MUC5AC (60% vs. 22%), Akt2 (64% vs. 36%), K8 (98% vs. 82%), annexin (56% vs. 44%) and less vascular epithelial growth factor (22% vs. 78%) in comparison to IH-CCA (26). Moreover, prognostic markers resulted differentially expressed, as perihilar CCAs carried out stronger perineural invasion (83% vs. 42%, P<0.001) than peripheral cholangiocarcinomas (26). The different biological and molecular features strongly support the concept that IH-CCA and EH-CCA arise from different carcinogenetic processes and different cells of origin. Particularly relevant in the view of future clinical trials is the lower expression of vascular endothelial growth factor in EH-CCA with respect to the IH-CCA, which could affect the response to anti-angiogenic based therapy. Recently, Roskams et al., carried out a study aimed to investigate the CCA histological diversity in relation with the heterogeneity of cholangiocytes lining the biliary tree: hilar mucin producing cells versus peripheral cuboidal ductular cells or hHpSCs (27). They investigated the clinical-pathological and molecular features of 79 resected CCAs and their relationship with hHpSCs and, compared the spectrum of CCAs with respect to K19-positive or negative HCCs. According to this study, 52% of the CCA were pure mucin producing whereas 48% showed mixed differentiation features including focal hepatocytic differentiation and CCL features. CCA with mixed features (mixed-CCAs) showed peripheral location, larger tumor size, less micro-vascular invasion, less lymph node involvement compared to pure mucin producing CCAs which showed hilar location, smaller tumour size, more microvascular invasion and more lymph node involvement. S100p expression was seen only in CCAs, while neural cell adhesion molecule (NCAM) expression was only present in mixed-CCAs. Molecular profiling showed high homology between mixed-CCAs and K19-positive HCCs (considered of HpSCs origin). The authors concluded that mixed-CCAs and K19-positive HCCs have a similar molecular profile as the most peripheral ductules, containing hHpSCs, while mucin producing CCAs have a similar profile to mucin producing large IH and EH bile ducts, possibly reflecting the different cells of origin (27). On the basis of this recent study, it is obvious that approximately half of IH-CCA cases displays biology and perhaps oncogenesis similar to EH-CCA and this should be taken in adequate consideration in future epidemiologic studies. Differences in clinical-pathological features between CCAs arising from small (interlobular bile ducts) or medium/large IH bile ducts are under investigations. Responding to the need of classifying IH-CCA in relation to the hetereogenity of the small vs. the medium-large IH bile ducts, recently Nakanuma et al. proposed to separately consider a small duct type (peripheral type) and a large bile duct type (perihilar type) (23). The former is mainly described as a tubular or micropapillary adenocarcinoma while the latter involves the IH large bile ducts. In accordance with phenotypical differences between interlobular and medium-large bile ducts, Aishima et al. investigated 87 cases of IH-CCA smaller than 5 cm in diameter (28). They considered a perihilar type IH-CCA, showing IH large bile duct involvement within the tumour, and a peripheral type contained preserved architecture of the portal triad. They demonstrated that the frequency of perineural invasion, lymph node metastasis, vascular invasion, intrahepatic metastasis and extrahepatic recurrence of IH-CCA from large ducts was significantly higher than that of IH-CCA from small ducts (28). The survival of patients with IH-CCA from large ducts was worse than that of patients with IH-CCA from small ducts (28). In our hypothesis the clinical-pathological differences observed among CCAs arising from small bile ducts and large bile ducts reflect the different lineage of origin, with the former arising from cells of the hHpSC lineage and the latter arising from cells of the PBGs derived lineage.

CCA is a heterogeneous devastating cancer with a worldwide increasing incidence and mortality. The main risk factors are liver flukes in Asian countries, PSC and HCV in western countries. The IH-CCA frequently emerges in the setting of chronic liver diseases requiring differential diagnosis with respect to HCC. It is difficult to diagnose and frequently presents at a late stage when no effective therapeutic intervention is possible. Although much work still remain to be done, significant advance has been obtained in definition of CCA risk factors. However, for a real progress, this should be translated in preventive strategies but, unfortunately, very few or nothing has been so far performed in this setting. In areas endemic for liver flukes, control of foodborne infection or mass anthelmintic therapy certainly will results in decrease of CCA incidence but this require politic and socio-economic interventions. In patients with PBH with bile duct dilatation, the prophylactic excision of gallbladder and common bile duct has been indicated by the Japan Societies Guidelines. In PSC patients a strict follow-up is the unique possible strategy although, in a recent study, performing ultra sounds+CA19-9 annually, resulted in a 91% sensitivity and 62% specificity of CCA diagnosis with at least 2/3 of CCA diagnosed in a stage susceptible of surgical resection (77). Identification of biomarkers in serum and bile for early diagnosis and surveillance of populations at risk and the complete definition of risk factors are the challenges for the next future that could improve the prognosis of this cancer (78).