A 57-year old chronic smoker, chronic alcoholic male presented with a one week history of worsening right upper quadrant sharp abdominal pain, vomiting, dark urine, pale stools and yellowish discoloration of the skin. On physical examination he was hemodynamically stable, jaundiced and icteric sclera was noted. Abdominal exam was significant for diffuse tenderness and moderate distention without peritoneal signs. Laboratory investigations showed a white blood cell (WBC) count of 31 Thou/mm3, total bilirubin of 15 mg/dL, direct bilirubin of 10 mg/dL, alkaline phosphatase of 302 IU/L, ALT of 142 IU/L, AST of 104 IU/L and Albumin of 3 g/dL. Abdominal CT showed dilated intra and extra hepatic biliary ducts (up to 13 mm) with no obstructing lesions. He was started on antibiotics for presumed ascending cholangitis. Urgent diagnostic endoscopic ultrasound with FNA was perfomed and demonstrated a 15.0 mm 11.7 mm hypoechoic poorly defined pancreatic head mass infiltrating the distal common bile duct (CBD) and involving the duodenum. Final pathology report confirmed the diagnosis of pancreatic ductal adenocarcinoma (Figures 1,2). ERCP was attempted but cannulation of CBD was unsuccessful. On day 2 of admission percutaneous drainage by interventional radiology was achieved. Despite good drainage, and broad antibiotic coverage, patients condition deteriorated. He became hypotensive with worsening leukocytosis and developed acute kidney injury, later necessitating hemodialysis. For this he was taken to the operating room for surgical decompression which revealed a distended necrotic gallbladder (GB). A T-tube was then placed in the CBD with good bile drainage. Pathology later demonstrated extensive gangrenous cholecystitis with full thickness necrosis of the wall (Figures 3,4). Rendezvous procedure with ERCP was done and CBD metallic stent was placed. Although patient had a protracted stay at the hospital, he had significant improvement and was discharged in a stable condition. 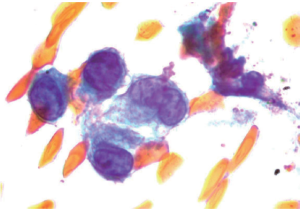 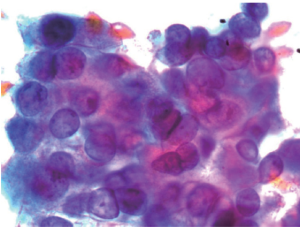 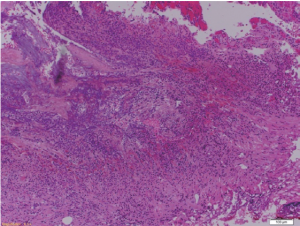 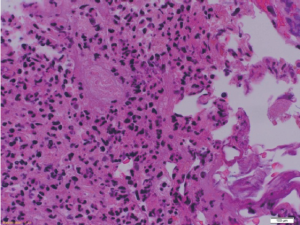 GC is an advanced stage of gallbladder inflammation. Incidence ranges from 2-29% in all patients with acute cholecystitis but occurs more often in older male patients (1). The etiology of GC is believed to be primarily due to vascular compromise secondary to sustained obstruction of the cystic duct. It is the combination of GB wall tension and the intense inflammatory reaction that results in either local or global GB wall ischemia (2). The risk of GC increases in patients with coexisting cardiovascular disease, critical illness and diabetes (1,3). The clinical diagnosis can be extremely challenging as the preoperative differentiation between GC and uncomplicated acute cholecystitis may be very difficult and laboratory and imaging results may be non specific (1,4). Habib et al. (5) demonstrated that only 7.5% of patients with GC were able to be identified preoperatively despite the use of clinical, laboratory and image findings.

Although the patient presented with a picture of ascending cholangitis, the lack of CBD stones or GB stones as a cause of cholangitis combined with the lack of improvement on conventional therapy ought to make one think of alternative diagnoses. There have been no previous reports of pancreatic adenocarcinoma presenting with GC. Given the high morbidity and mortality associated with GC, an early diagnosis is a key especially in the setting of an uncommonly associated disease like pancreatic adenocarcinoma and a prompt treatment approach is lifesaving. In conclusion, GC should be considered in critically ill patients presenting with malignant obstructive jaundice.