Progranulin (PGRN), also known as granulin-epithelin precursor, proepithelin, acrogranin and GP88/PC-cell derived growth factor, is a secreted glycoprotein conserved in most eukaryotes (1). It has been shown to mediate cell cycle progression, cell motility (2) and inflammatory processes (3). Structurally, it belongs to none of the well-established growth factor families, and inhibition of the known growth factor receptors such as IGF and EGF receptors fails to prevent the actions of PGRN (2).

PGRN has been implicated in a number of disease states. For example, a loss- of-function mutation in PGRN has been associated with the onset of frontotemporal lobar degeneration (4). Conversely, PGRN over-activity occurs in many types of cancer (2,5-8) and is thought to confer a more aggressive phenotype to the tumor cells (6). However, how the dysregulation of PGRN function leads to these pathogenic states is largely unknown.

Processing of PGRN to granulins

The human PGRN gene contains 12 protein-coding exons that result in 3 isoforms (9,10) and contains a signal sequence and a number of granulin-like domains. These domains are composed of highly conserved tandem repeats of a unique 12-cysteine sequence (11). The full-length PGRN protein is approximately 68.5 kDa, though it is heavily glycosylated and will therefore migrate as though it is much heavier (1). After secretion, the full-length protein can be proteolytically cleaved between the granulin-like domains by metalloproteinases such as matrix metalloproteinase-9 (MMP-9) (12), MMP-14 (13) and ADAMTS-7 (14). Complete cleavage of full length PGRN results in granulin peptides (GRN A-G and paragranulin) that are approximately 6 kDa in size, though intermediary cleavage products have also been identified (1). The full-length PGRN protein, the intermediaries and the GRN peptides all have biological activity, although it remains to be clarified if these are distinct or overlapping. Regardless, the proteolytic processing of full-length PGRN can be inhibited when secretory leukocyte protease inhibitor (SLPI) or high-density lipoprotein/apolipoprotein A-1 (HDL/ApoA-1) binds to full-length PGRN, preventing its cleavage (15). A schematic representation of the proteolytic cleavage of PGRN is described in Figure 1. 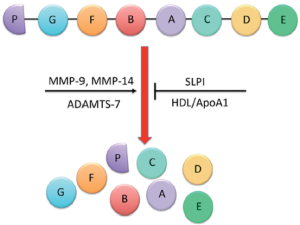 Figure 1 Proteolytic cleavage of PGRN. The human PGRN gene contains a number of granulin-like domains. After secretion, the full-length protein can be proteolytically cleaved between the granulin-like domains by metalloproteinases such as matrix metalloproteinase-9 (MMP-9), MMP-14, and ADAMTS-7. Complete cleavage of full-length PGRN results in granulin peptides (GRN A-G and paragranulin) that are approximately 6 kDa in size, though intermediary cleavage products have also been identified. The proteolytic processing of full-length PGRN can be inhibited when secretory leukocyte protease inhibitor (SLPI) or high-density lipoprotein/apolipoprotein A-1 (HDL/ApoA-1) binds to full-length PGRN to prevent its cleavage

Modes of action of progranulin

To date, no unique receptor for PGRN has been identified. However, PGRN has been shown to bind to the membrane proteins sortilin and tumor necrosis factor receptors (TNFR) 1 and 2 (1). Sortilin was originally identified as a regulator of lysosomal enzyme trafficking (16), but has also been shown to bind and regulate neurotrophic factors such as neurotensin (17) and pro-nerve growth factor (18). It is thought that sortilin mediates the uptake of extracellular PGRN and regulates its internalization within the cell (19,20). The binding of PGRN to the TNFRs, on the other hand, is thought to antagonize TNF-α binding, thereby exerting anti-inflammatory effects (21).

Some of the downstream signaling pathways activated by PGRN include the extracellular signal-regulated kinase (ERK) signaling cascade via the activation of Src homologous and collagen (Shc) protein and p44/42 MAPK, as well as phosphatidylinositol-3 kinase (PI3K) via the activation of Akt (6-8). Activation of these two pathways results in increased expression of Cyclin D1 and Cyclin B and an enhanced proliferation rate (7,22). In addition, PGRN has been shown to activate focal adhesion kinase (FAK) (7,23) and promote the formation of the paxillin/FAK/ERK complex, which promotes cell migration and invasion (23).

Hepatocellular carcinoma (HCC) is the most common type of liver cancer, arising from the malignant transformation of hepatocytes, occurring in most cases as a secondary consequence to hepatitis infections or liver cirrhosis. The incidence of HCC is highest in Asia and Africa where there is high prevalence of Hepatitis B and C, although prevalence in western countries is on the rise (29).

The median survival rate of HCC is approximately 6 months. The prognosis is poor due, in part, to the late presentation of symptoms, large tumors and lack of effective treatment options (29). However, the outcome of patients with HCC has been improved with the introduction of Sorafenib as a test chemotherapeutic agent. Sorafenib is a small inhibitor molecule that targets a number of receptor tyrosine kinases (e.g., VEGF and PCDGF) as well as the Raf kinases (30). In clinical trials, Sorafenib has improved median survival by approximately 3 months (31), although in other trials it proved ineffective as an adjunct therapy (32).

Cholangiocarcinoma is a tumor that arises from the malignant transformation of the epithelial cells of the intrahepatic or extrahepatic bile ducts (35). This type of liver cancer has very poor prognosis and is extremely aggressive, with symptoms unobservable until there is bile duct blockage by the tumor (36). Treatment of cholangiocarcinoma by chemotherapy and radiation therapy is not very effective; surgical resection of the tumor is the only treatment option (36). Further study of the factors that lead to tumor initiation, promotion, and progression is necessary for designing alternative treatments for this devastating illness. 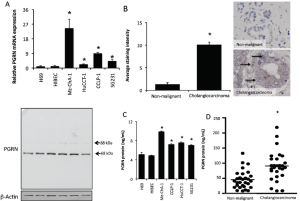 Increased PGRN secretion was demonstrated to exert subsequent growth-promoting effects on cholangiocarcinoma cells via the activation of Akt and subsequent phosphorylation and nuclear extrusion of Forkhead box protein O1 (FOXO1) (24). A summary of our findings can be found in Figure 3 (24). These data suggest that the upregulation of PGRN may be a key feature associated with the progression of cholangiocarcinoma; inhibiting PGRN expression or function may be a viable target for the development of an effective adjunct therapy to treat this deadly disease. 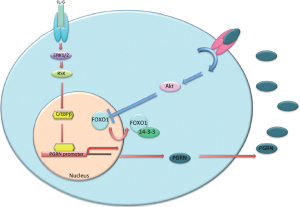 Figure 3 Schematic diagram summarizing the major actions of PGRN in CCA. PGRN expression is upregulated in cholangiocarcinoma via IL-6-driven activation of ERK1/2 and RSK1. These signal transduction events in turn activate C/EBP, which is a predominant transcription factor known to regulate PGRN expression. PGRN is then secreted, where it may act on the surrounding cells (autocrine or paracrine) via an unknown receptor, leading to increased Akt activity and subsequent increased phospho-FOXO1. Phosphorylation of FOXO1 causes nuclear extrusion into the cytoplasm, where it is known to bind the chaperone protein 14-3-3. Cytoplasmic location of FOXO1 inhibits its activity as a transcription activator, thereby changing the expression of certain target genes, which ultimately has growth-promoting properties on the cholangiocarcinoma cells (reprinted with permission from Frampton, et al. Gut, 2012; 61:268-77) (43)

Interestingly, we have also demonstrated that PGRN expression and secretion is increased during hyperplastic cholangiocyte proliferation in a rodent model of extrahepatic biliary obstruction (43). Furthermore, PGRN exerted growth-promoting effects on cholangiocytes via the nuclear extrusion and inhibition of FOXO1, although the mechanism by which this occurred is different (43). Specifically, FOXO1 was extruded after phosphorylation via a mechanism involving the Akt signaling pathway in cholangiocarcinoma, whereas in hyperplastic cholangiocyte proliferation PGRN inhibited the expression of the deacetylase Sirt1 and subsequently increased acetylation of FOXO1, which also results in nuclear extrusion (43). One explanation for the difference in the mechanism by which FOXO1 is inhibited may be due to the increased reliance on Akt signaling by cholangiocarcinoma compared to their non-malignant counterparts (46-48).

Progranulin in other GI cancers

Chemoresistant colorectal cancer cells (CRCs), selected by chronic exposure to high levels of chemotherapeutic drugs, secrete soluble factors that can stimulate growth in the parental chemonaïve cells and make the chemona?ve cells less sensitive to chemotherapy treatment (49). To identify the soluble factors released from the chemoresistant CRCs, proteomic analysis of the conditioned media was performed, demonstrating that PGRN levels (among other factors) were significantly higher in the media from chemoresistant CRCs than the chemona?ve cells (49). Furthermore, treatment of the parental cells with recombinant PGRN conferred a chemoresistant phenotype, suggesting that chemoresistant tumor cells may promote resistance through the release of PGRN and other soluble factors that mediate survival in otherwise chemosensitive tumor cells (49).

Regardless of the tumor type, it is evident that PGRN is upregulated in cancer cells and confers growth-promoting and chemoresistant effects. A role for PGRN in migration, invasion and angiogenesis is also evident. Specific targeting of progranulin may represent an alternative target for the development of therapeutic strategies to combat these gastrointestinal cancers.

The authors acknowledges Mr. Gabriel Frampton for assistance in proof reading this review.

Disclosure: The author declares no conflict of interest.