5-fluorouracil (5-FU) is the most commonly administered concurrent chemotherapy with pelvic radiotherapy (3-5). Comparing the efficacy of the two infusion methods, bolus vs. continuous infusion (CI) of 5-FU, CI is superior to bolus infusion in terms of tumor response and is associated with a slight increase in the overall survival of patients with advanced colorectal cancer (6-9).

While CI has the biological advantage of prolonging the exposure of cells to 5-FU and improving anti-tumor activity, its disadvantages include the need for indwelling catheters and infusion pumps, with potential complications, such as infection, bleeding, thrombosis, and pneumothorax, which can result from central venous access and patient discomfort (10,11).

Capecitabine is an orally administered fluoropyrimidine carbamate, which is preferentially converted to active 5-FU through a three-step enzymatic pathway in the liver and in the tumor cells (12,13). When administered on a twice-daily schedule, it may mimic the pharmacokinetics of a protracted 5-FU infusion. In a questionnaire-based study, most patients preferred oral chemotherapy to i.v. infusion with respect to the quality of life, as long as the therapeutic effects were equivalent. In addition, radiotherapy can upregulate thymidine phosphorylase in tumor cells but not in normal tissue. Thus, there may be a synergistic effect between radiotherapy and capecitabine (14,15).

Patients were eligible if they presented with histologically confirmed rectal adenocarcinoma, tumor extension through the bowel wall (T3-T4) or pelvic lymph-node involvement (as determined by clinical work-ups, including computed tomography pelvic magnetic resonance imaging and/or endoscopic ultrasound) and were aged 18 years with Eastern Cooperative Oncology Group performance status of 2 or below, adequate hematological, liver and renal function and no evidence of distal metastatic spread at diagnosis. Patients who fulfilled the above eligibility criteria were made aware of the purpose and the design of the study and required to sign the informed consent.

Patients were excluded from the study if they had other than adenocarcinoma tumor histology, prior chemotherapy or radiotherapy in the pelvic region or other serious medical condition.

The total irradiation dose of 45 Gy was delivered in conventional fractionation (daily fractions of 1.8 Gy/five days per week over 5 weeks) using three-dimensional conformal techniques with high-energy photons (6-15 MV). The clinical target volume included the entire macroscopic tumor with a minimum margin of 5 cm, the mesorectum (plus 1.0-1.5 cm margin lateral to the pelvic brim), internal iliac and presacral lymph nodes up to the L5-S1 junction. The external iliac nodal chains are typically included only for T4 lesions. After CTV expansion of at least 1 cm to create a PTV, multiple field techniques were used; fields were arranged by taking into account doses delivered to normal tissues during radiotherapy for primary tumor. However, no specific dose-volume constraints were indicated by the treatment protocol. The dose was referred to a normalization point inside the PTV to obtain a homogeneity ranging between 5% to the prescribed dose.

Capecitabine was administered continuously throughout the 5 weeks of radiotherapy course at 825 mg/m2 given twice daily 5 days per week during the days when radiotherapy was administered. The first daily dose was given approximately 2 h before radiation treatment with the second dose taken 12 h after. Adjuvant chemotherapy after surgical resection was started at 4-6 weeks post-operatively and consisted of oxaliplatin based regimen.

Surgery was planned approximately 6 weeks after the completion of chemoradiotherapy. In all cases, resection was performed according to the principles of total mesorectal excision, meaning sharp dissection under direct vision along the parietal pelvic fascia, preserving the pelvic hypogastric nerve supply. The decisions regarding which type of surgery (low-anterior or abdomino-perineal resection) and whether a temporary colostomy should be performed were left to the discretion of the surgical oncology team.

In sphincter-preserving procedures, a 2-cm disease-free distal resection margin, both clinically and pathologically, was necessary in order for surgery to be regarded as a complete curative resection. Peri-operative complications included adverse events occurring within 30 days after surgery.

During the course of chemoradiation therapy, patients were seen every week in order to not only assess acute toxicity and compliance with the chemoradiation but also to verify that oral capecitabine was taken properly. Hematology and biochemistry were monitored weekly during chemo-radiotherapy and before each chemotherapy cycle. Treatment toxicity was monitored by use of the National Cancer Institute Common Toxicity Criteria, version 3.0. Appropriate chemotherapy dose adjustment was undertaken for any significant acute toxicity. Median follow up period was 12.5 months (ranging from 4-28 months). 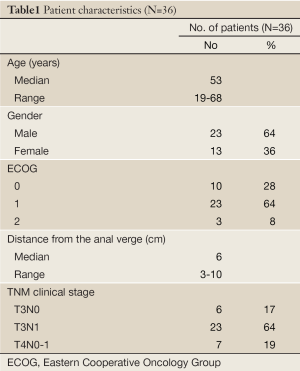 Most patients had a good performance status [ECOG 0 (28%) - ECOG 1 (64%)]. Only 33 patients were able to complete the treatment protocol and became evaluable for clinical response and safety profile, as well as pathological response and down-staging. The other 3 patients lost follow up during the course of chemo-radiotherapy.

Of 36 patients, 33 completed the preoperative chemoradiation as initially planned. Treatment was well tolerated. The acute toxicity grades during preoperative concurrent chemoradiation are given in Table 2. Most adverse events were mild to moderate in intensity and all of them recovered spontaneously with supportive management. Such frequent toxicity included grade 1 and 2 [radiation dermatitis (55%), diarrhea (42%), fatigue (36%), hand-foot skin reaction (33%) and leucopenia (30%)]. Grade 3 toxicity occurred in 2 patients (6%) and consisted of diarrhea. Neither grade 4 toxicity nor treatment-related deaths were recorded. Among the 33 patients in our study, Six (12%) had a modification of the chemotherapy scheme during the course of treatment: temporary capecitabine interruption for one week in two patients because of toxicity (grade 3 diarrhea) and the dose was reduced in other two patients who developed grade 2 hand-foot skin syndrome during the last two weeks of treatment along with patients preference. 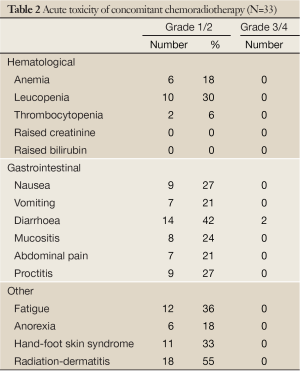 After completion of chemo-radiotherapy and before definitive surgery, every patient was evaluated for clinical response. Tumor response was assessed by computerized tomography and/or magnetic resonance imaging, down-staging, (overall response) in T-category was observed in 22 patients (67%) and in N-category in 17 patients (52%). Down-staging on both T and N categories was achieved in 10 patients (30%). Stable disease was observed in 9 patients (27%), whereas disease progression on primary tumor was seen in 2 patients (6%).

Since publication of the CAO/ARO/AIO-94 trial (1), fluoropyrimidine-based preoperative chemoradiation has become the standard of care for clinical stage II-III rectal cancer in many countries. Recently, two phase 3 randomized studies (16,17) have shown that capecitabine is equivalent to 5-FU (proven non-inferiority) in perioperative chemoradiation therapy. Therefore, capecitabine can be considered an acceptable alternative option to infusional 5-FU, because in these studies capecitabine given concurrently with radiation therapy is now listed in the guidelines as a catogory 2A recommendation (18).

In our study, a pathologic complete response was achieved in 7 patients (21%). The rates of T down staging were 61%. From the preliminary reports on neoadjuvant chemoradiotherapy with oral capecitabine, the complete pathological response rate varies from 4% to 31% (1,16,20,22,23). It is unlikely that the difference of treatment makes such a wide range in the pathological complete response rates because most studies, including ours, used conventional doses of radiation and capecitabine. It seems that the most probable reasons are the extent of pathological examination and the quality control of chemotherapeutic compliance and the proportion of T4 lesions. In our study T3 lesions represented 81% of cases while T4 lesions were only 19% which explained our result.

Our results also are comparable well with those reported with retrospective analyses of phase 2 studies where capecitabine was given in combination with radiotherapy which has shown cumulative pCR rates that are similar to infusional fluorouracil. Sanghera and colleagues (24) found similar pCR rates with capecitabine (17%) and infusional fluorouracil (20%) in a meta-analysis of 71 trials with a total of 4,732 patients.

The incidence of acute toxicity during capecitabine-radiotherapy was very low. Grade 3/4 side-effects were observed in only 2 patients (6%). Similarly, low toxicity rates have been reported in other capecitabine-radiotherapy trials (23,25,26). In our study, even if mild and moderate toxicity were common, all patients enrolled were finally able to receive the whole capecitabine planned dose with dose modification in only 12% of patients. These data confirm the safety and feasibility of the treatment program, as well as the high level of compliance achieved.

All patients underwent curative surgical resection and most of them (25 out of 33) had a sphincter-preserving operation. These data on conservative surgery compare fairly well with other series (20,25,26). Although Bujko et al. (27), comparing two different preoperative approaches, showed no significant increase in sphincter preservation despite adequate clinical response rate, other study demonstrated a strong correlation between response to pre-operative chemoradiotherapy and the possibility of a sphincter-preserving procedure (28).

In the present study, post-operative complications were uncommon and consistent with those reported in similar studies (29), as well in the short-term pre-operative (21) and the conventional fractionated post-operative radiotherapy (30).

Overall, our results were in agreement with those trials using 5-FU based neoadjuvant chemoradiation in patients with locally advanced, resectable rectal cancer (5,22,25).

This trial has some limitations. One is the relatively small number of patients. Another factor is that it is a single institution study but our present study is the first reported series on pre-operative chemoradiotherapy with capecitabine in our institution.

Capecitabine can be regarded as an effective, well tolerated, and convenient alternative to fluorouracilin patients undergoing neoadjuvant chemoradiotherapy for locally advanced rectal cancer.