Cholangiocytes, which line the intrahepatic biliary epithelium (1,2), modify bile originally secreted at the bile canaliculus (3) before it reaches the duodenum (4). The modification of ductal bile is regulated by the secretion/reabsorption of water and electrolytes that is regulated by a number of gastrointestinal hormones, peptides and neurotransmitters (1,4-9). Regarding gastrointestinal hormones, secretin stimulates the secretion of water and HCO3– ions by interaction with basolateral SR (1,5-7), an interaction that leads to increased cyclic adenosine 3',5'-monophosphate (cAMP) levels, phosphorylation of protein kinase A (PKA), opening of the cystic fibrosis transmembrane regulator (CFTR) leading to activation of the chloride bicarbonate anion exchanger 2 (Cl–/HCO3– AE2) (10) with subsequent secretion of HCO3– into bile (1,4-9).

In addition to regulate ductal bile secretion, cholangiocytes are the target cells in chronic liver diseases such as primary biliary cirrhosis (PBC) and primary sclerosing cholangitis (PSC), diseases that are characterized by dysregulation between biliary growth/apoptosis (11,12). Animal models of cholestasis such as extrahepatic bile duct ligation (BDL) (4,8,13), acute treatment with carbon tetrachloride (CCl4) (14) and chronic administration of the toxin, a-naphthylisothiocyanate (15) or gamma-aminobutyric acid (GABA) (16) induces the proliferation and/or loss of bile ducts (4,8,13-15). We have shown that in pathological conditions associated with biliary hyperplasia (e.g., following BDL) (4,8) there is enhanced expression of SR and increased secretin-stimulated cAMP levels and bile and bicarbonate secretion (4,6-8,13), parameters which have been suggested to be functional indices of cholangiocyte proliferation (4,6-8,13). In models associated with biliary damage [e.g., after administration of carbon tetrachloride (CCl4) or GABA] (14,15) there is reduced expression of SR and decreased responsiveness to secretin (14,15).

There is growing information regarding the mechanisms of biliary proliferation (17-22). For example, recent studies have shown that cytokines/growth factors such as interleukins (e.g., IL6), serotonin, melatonin, angiogenic factors [e.g., vascular endothelial growth factor (VEGF)-A/C] and nerve growth factor (NGF) regulate the proliferation of bile ducts by autocrine mechanisms (17-22). Serotonin inhibits biliary hyperplasia in cholestatic rats by activation of serotonin receptor 1A and 1B (17). While vascular endothelial growth factor-A/C (VEGF-A/C) and NGF stimulate cholangiocyte hyperplasia by interacting with VEGFR-2/3, melatonin has been shown to inhibit biliary growth by down-regulation of cAMP signaling (17,19,20,22). Both autocrine and paracrine VEGF signaling stimulates the growth of liver cysts in Pkd2KO mice (23). In polycystic liver diseases, VEGF and angiopoietin-1 stimulate the growth of biliary cysts and their vascular supply (24). Also, gastrin inhibits both hyperplastic and neoplastic biliary growth by interaction with CCK-B receptors through translocation of Ca2+-dependent PKC isoforms (8,25,26). We have also shown that gastrin inhibits secretin-stimulated ductal secretion in cholestatic rats (27). Since omeprazole has been shown to increase gastrin levels in rodents and humans (28-30), we performed studies aimed to demonstrate that chronic administration of omeprazole inhibits biliary growth and secretin-stimulated ductal secretion by enhanced release of gastrin serum levels.

All animal procedures were performed according to protocols approved by the Scott and White and Texas A&M Health Science Center IACUC. Normal, BDL or bile duct incannulated (BDIN) (immediately after surgery) (4) rats were treated with omeprazole (40 mg/kg BW by daily gavage administration in 500 mmol/L of sodium bicarbonate, pH 9.0 containing 0.75% methylcellulose) (31) or vehicle for 1 week. While BDL rats were used for the collection of serum, liver tissue and cholangiocytes, BDIN were used for the in vivo studies of biliary physiology. In all animals used, we measured liver and body weight and liver to body weight ratio, an index of liver cell growth including cholangiocytes (4).

Virtually pure cholangiocytes (by histochemistry for γ-glutamyl transpeptidase) (32) were isolated by immunoaffinity separation by a monoclonal antibody (a rat IgG2a, a gift from Dr. R. Faris, Brown University, Providence, RI) against an unidentified antigen expressed by all mouse cholangiocytes (2).

Basal and secretin-stimulated intracellular cAMP levels were measured in purified cholangiocytes from BDL rats treated with vehicle or omeprazole for 1 week by commercially available RIA kits (Amersham, GE Health Care). Briefly, after isolation cholangiocytes were incubated for 1 hour at 37 °C to restore membrane proteins damaged during the isolation procedure by proteolytic enzymes (8,36,37) and subsequently treated with 0.2% BSA (basal) or secretin (100 nmol/L) (8,37) in the presence of 0.2% BSA for 5 minutes.

The in vivo studies aimed to evaluate the effect of secretin on bile and bicarbonate secretion were performed in BDIN rats, which were prepared for bile collection as described by us (4). When steady-state bile flow was reached (approximately 60 minutes after infusion of Krebs-Henseleit bicarbonate solution, KRH, via a jugular vein), secretin (10-7 M) administered for 30 min (by a jugular vein) followed by a final infusion of KRH for 60 min. Bicarbonate concentration (measured as total CO2) was determined by a Natelson microgasometer apparatus (Scientific Industries, Bohemia, NY).

Since omeprazole has been shown to increase gastrin serum levels in rodents and humans (28-30), we evaluated the levels of this gastrointestinal hormone in serum from the selected groups of animals. The serum levels of gastrin were measured by radioimmunoassay using commercially available kits obtained respectively from Diagnostic Products Corporation (DPC, Los Angeles, CA) according to the instructions supplied by the vendor.

Proliferation assay was performed in our normal rat intrahepatic cholangiocyte cell line (NRIC) following in vitro treatment with omeprazole (0.5, 10 and 20 µM) for 48 h. Cell proliferation was measured as previously described (16,38). NRICs were seeded (7,000 cells/well) onto 96-well plates in complete medium and allowed to adhere overnight at 37 °C. Cells were then serum-starved in medium containing 0.5% FBS for 24 h, washed twice with 1x phosphate buffered saline (PBS). Cells were incubated for 48 h with the respective treatments, at which time 10 µL of Cell Titer 96 (Promega, Madison, WI) was added to each well (16,38). Absorbance at 490 nm was measure with a microplate reader (Microplate Spectrophotometer, Spectra Max 3,400 pc, Molecular Devices, Sunnyvale, CA). Absorbance is directly correlated to the number of viable cells and data is presented as fold-change compared to basal (16,38). 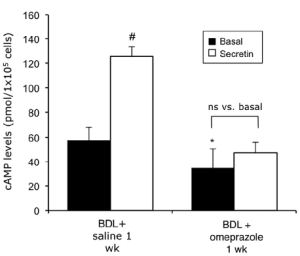 To determine if omeprazole effects are mediated by changes in serum gastrin levels, we measured the levels of this gastrointestinal hormone in both normal and BDL rats treated with saline or omeprazole. Consistent with our previous findings (33), we have shown that gastrin serum levels are higher in BDL compared to normal rats (Table 1). Prolonged administration of omeprazole to normal or BDL rats increased gastrin serum levels compared to their corresponding values of normal and BDL rats treated with saline for 1 week (Table 1). 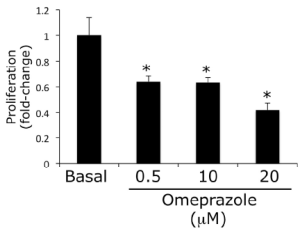 The study relates to the in vivo inhibitory effect of omeprazole on biliary proliferation, secretin receptor gene expression and basal and secretin-stimulated cAMP levels and bile and bicarbonate secretion. Specifically, we have treated normal and BDL rats with omeprazole or saline for 1 week and have demonstrated that omeprazole decreases IBDM in liver sections and biliary proliferation in purified cholangiocytes from BDL rats. Also, omeprazole decreased SR gene expression and both basal and secretin-stimulated cAMP levels in purified cholangiocytes from BDL rats, and secretin-induced bile and bicarbonate secretion in BDIN rats. Conflicting data exists regarding the role of omeprazole on liver cell growth. While a study has shown that omeprazole stimulates liver regeneration after partial hepatectomy by increased gastrin serum levels (39), another study has demonstrated an inhibitory effect of omeprazole on hepatic regeneration (40). Also, while a study has demonstrated liver tumor promoting effects of omeprazole in rodents (41), several other studies have provided evidence for anti-carcinogenic properties of omeprazole against the growth of human colon cancer cells both in vivo and in vitro (42-44). The inhibitory effects of omeprazole were mediated by increase serum levels of gastrin that we have previously shown to inhibit both hyperplastic and neoplastic biliary proliferation (8,25,26). The study has strong clinical implications since the diffuse use of proton-pump inhibitors may not only reduce gastric stomach secretion (45,46), but may ameliorate biliary disorders in chronic liver diseases.

A number of studies have increased our knowledge on the mechanisms of biliary hyperplasia in the cholestatic BDL model that is characterized by growth/damage of cholangiocytes (4,6-8,13,14,18-20,26,27,33). Using this model, several studies have shown that a number of gastrointestinal hormones and growth factors regulate the balance between cholangiocyte proliferation/damage that is key for maintaining the homeostasis of the biliary epithelium (4,6-8,13,14,18-20,26,27,33). We used the BDL model of cholestasis since it is characterized by enhanced gastrin serum levels (33); this would allow us to relate the antiproliferative effects of omeprazole on biliary growth on changes of gastrin serum levels. The increase in serum gastrin levels observed in BDL compared to normal rats (33) may be due to a compensatory mechanism aimed to decrease the enhanced biliary mass.

Supporting this view, the inhibitory effect of omeprazole on biliary mass was associated with enhanced gastrin serum levels. Although we did not observe any changes in serum chemistry in BDL rats treated with omeprazole compared to BDL rats treated with vehicle, rare cases of liver damage by proton pump inhibitors (e.g., pantoprazole) and omeprazole have been described in clinical setting (47-49). For example, acute liver failure (massive centrolobular necrosis without fibrosis) attributed to omeprazole was observed in a 62-year old man with gastroesophageal reflux (48). Controlled trial of two doses of omeprazole in 32 patients with duodenal ulcer described higher SGPT serum levels within the first 1-2 weeks, resolving rapidly on withdrawal of the drug (47). One female patient receiving pantoprazole during a corticosteroid therapy for encephalomyelitis disseminate developed sudden idiosyncratic hepatocellular damage (49). On the contrary, other studies in patients showed no alterations in SGPT serum levels, jaundice or hepatitis after omeprazole administration (50-52).

No information exists regarding the role of omeprazole in the regulation of biliary growth and liver damage. Thus, our studies due to the diffuse use of omeprazole in the clinical setting open the new possibility that proton pump inhibitors may be beneficial during the progression of biliary disorders. Since we demonstrated that omeprazole treatment decrease biliary mass in vivo and cell proliferation in purified cholangiocytes, we performed studies aimed to demonstrate that the inhibitory effects of omeprazole on biliary hyperplasia are due to increased serum levels of gastrin that we have recently demonstrate to inhibit hyperplastic and neoplastic biliary growth (8,25-27) and secretin-stimulated choleresis, a functional marker of biliary proliferation (4,8,13,14,35). At the functional level, the decrease in intrahepatic bile ductal mass was also supported by reduced choleretic response of large bile ducts to secretin (4,8,14,27,35). We also found that omeprazole can inhibit cholangiocyte proliferation in a cholangiocyte cell line, which suggests omeprazole may directly influence biliary proliferation. Recently, omeprazole has been identified as an aryl hydrocarbon receptor agonist, which may mediate its antiproliferative effects in several cancer cell types (53,54). This concept will be addressed in future studies hyperplastic and neoplastic cholangiocytes.

Contrasting information exists regarding the trophic or antiproliferative effects of gastrin on epithelia cell growth. For example, gastrin has been shown to stimulate the proliferation of enterochromaffin-like cells of the stomach and colon epithelial cells, (55,56) but it does not stimulate cell replication of the oxyntic mucosal D cells (57) and rat liver (58). Activation of CCK-B/gastrin receptor inhibits the growth of the pancreatic cell lines, MiaPaca-2 and Panc-1 (59), in contrast to the mitotic stimulatory effects observed in AR4-2J cells (60).