Autoimmune thyroid diseases are common disorders in the population. The most common autoimmune thyroid diseases are Hashimoto’s thyroiditis (2-3% of the population) and Graves’ disease (1-2% of women and 0.1% to 0.2% of men) (1). The treatment of Hashimoto’s thyroiditis is based on levothyroxine replacement (2). Moreover, Graves’ disease can be treated with anti-thyroid drugs, radioactive iodine or thyroidectomy. All these treatment options may lead, in the short or long time, to hypothyroidism (3).

Approximately 62-82% of the levothyroxine is absorbed after oral administration, in the first 3 hours after ingestion, particularly in the jejunum and ileum (4). On average, 70% to 80% of the ingested dose is absorbed in a euthyroid individual, and this rate of absorption may be decreased in patients with hypothyroidism (5). The absorption of levothyroxine is maximum when the stomach is empty, reflecting the importance of gastric acidity in the process. Furthermore, the integrity of the gastrointestinal tract is a key factor for adequate absorption of thyroxine.

The main cause of inadequate control and increased need of thyroid hormone in patients with hypothyroidism is poor adherence to the correct use of levothyroxine. However, once poor adherence is ruled out and overcome by alternative treatment regimens (6,7), the coexistence of other diseases that may interfere with treatment should be investigated, especially in patients who do not achieve biochemical control, despite high doses of levothyroxine (>2 µcg/kg) (Table 1). Celiac disease and atrophic gastritis are autoimmune diseases, and its prevalence is higher in patients with thyroid dysfunction (8). In subjects with hypothyroidism, the occurrence of these disorders may be associated with higher doses of levothyroxine (9). Similarly, patients with jejunoileal bypass or other bowel resection may require adjustment of levothyroxine after surgery (10). Other factors, including age, poor diet, medication and preexisting gastrointestinal malabsorption can also affect thyroxine absorption (4). 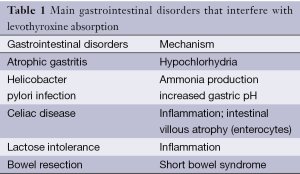 The objective of this review is to describe the main disorders of the gastrointestinal tract that affect patients with autoimmune thyroid disease, and its treatment with thyroid hormone.

Autoimmune gastritis is a disease characterized by the presence of parietal cell antibodies (PCA) in the circulation, and is often associated with autoimmune thyroiditis and/or other autoimmune disorders (11). It is estimated that 30% of patients with thyroid diseases present circulating PCA, this being the main immunological marker of autoimmune atrophic gastritis. The target antigen is a pump H+/K+ ATPase located on the apical membrane and intracellular gastric parietal cell (12,13). The process is characterized by the disappearance of the oxyntic glands and gastric atrophy, which can progress to chronic gastritis (13,14). The involvement of the gastric parietal cells leads to achlorhydria and decreased production of intrinsic factor, which absence causes vitamin B12 deficiency (15). Furthermore, reduced gastric acidity can change the ionization and the conformation of the thyroxine molecule, reducing its absorption in the small intestine (8). Checchi et al. (16) evaluated 391 patients with clinical or subclinical hypothyroidism associated to autoimmune thyroiditis, treated with levothyroxine and with appropriate levels of TSH (TSH 0.3-3.0 µU/mL). Patients were evaluated for the presence of antibodies PCA, as well as its correlation with the dose of levothyroxine used. The authors demonstrated that patients with PCA antibody positive (n=155) have significantly higher levothyroxine requirements when compared to patients with negative antibodies (n=236) (1.24±0.40 µg/kg × 1.06±0.36 µg/kg). They also found a significant correlation between antibody levels and the daily dose of T4. Among patients with PCA, the dose was even higher in individuals with atrophic gastritis evident on histology. Thus, in this analysis (16), the presence of PCA in patients with autoimmune hypothyroidism has been an independent factor determining the need for higher doses of levothyroxine. 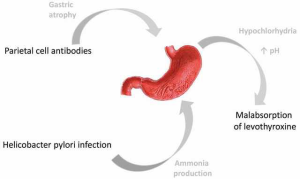 Among those 248 patients treated with levothyroxine for Centanni et al. (18), 11 patients diagnosed with Helicobacter pylori infection were treated for this infection. In those patients, TSH levels were measured before and after treatment, and were clearly reduced after eradication of Helicobacter pylori. These results clearly demonstrated the effect of infection on treatment with thyroid hormone, and the consequences of eradication of Helicobacter pylori, effects also established in other studies (25). The presence of Helicobacter pylori increases the pH of the stomach through the local production of ammonia, which changes the absorption of many drugs (25). Finally, another ten patients (18) with multinodular goiter and gastroesophageal reflux were treated with omeprazole 40 mg daily for 6 months, together with levothyroxine. After this period, the T4 dose had to be increased to maintain low levels of TSH. As well as other proton pump inhibitors, omeprazole is likely to reduce the absorption of levothyroxine because their effect on gastric acidity.

Celiac disease (CD) or gluten sensitive enteropathy is a condition of permanent intolerance to gluten from diet, which causes damage to the mucosa of the small intestine in genetically susceptible individuals. The immune response directed against specific antigens of gluten leads to the destruction of intestinal epithelial cells (enterocytes). Inflammation, hyperplasia of crypts and villous atrophy are some of the histological findings, which may regress or even disappear with the removal of gluten from the diet (9). Epidemiological studies found that the prevalence of CD in the population is approximately 1%, but it is known that this condition is underdiagnosed, mainly because many cases are subclinical (26-28). Celiac disease should be considered in many clinical situations, since early diagnosis and appropriate treatment have a significant impact on morbidity and mortality of affected individuals (29). The classic symptoms of gluten enteropathy include steatorrhea, vomiting and cachexia (30), however, in the past few decades, a milder form of the disease has been the most common clinical presentation (31-33). In these cases, mild symptoms or even atypical ones are observed. In those cases, CD can be diagnosed by family history or occasional screening (silent CD) (34).

An increased prevalence of thyroid dysfunction has been observed in patients with CD. Midhagen et al. (35) reported the coexistence of thyrotoxicosis in 5% and hypothyroidism in 5.8% of patients with gluten intolerance. Reunala and Collin (36) evaluated 305 patients with dermatitis herpetiformis and 383 CD patients, for approximately 10 years. In this period, the authors diagnosed autoimmune thyroid disease in 4.3% and 6.0% of patients, respectively. The thyroid disease can manifest before or after CD, and may be associated with a wide spectrum of other autoimmune disorders, including type 1 diabetes, autoimmune hepatitis and dermatomyositis (37). The coexistence of CD and thyroid disease is associated with genetic predisposition, particularly with HLA-DQ2 and HLA-DQ8 haplotypes (38-40). In addition, these diseases share a relationship with the cytotoxic T-lymphocyte associated antigen-4 (CTLA-4), a candidate for susceptibility to autoimmune thyroid disease gene (41,42).

Counsell et al. (43) found thyroid dysfunction in 14% of patients with CD (3.7% with hyperthyroidism and 10.3% with hypothyroidism). Of patients with thyroid disease (15/107), 11 already had already been diagnosed with thyroid disease at diagnosis of CD, three were diagnosed at the same time to CD and thyroid disease, and only one patient developed hypothyroidism 5 months after CD diagnosis and introduction of gluten free diet. The same authors reported a high prevalence of anti-thyroglobulin (11%) and antithyreoperoxidase antibodies (15%). Similarly, Velluzzi et al. (44) found a higher prevalence of antithyreoperoxidase antibodies in CD patients compared to a control group (29.7% vs. 9.6%).

The investigation of CD should be performed in patients with typical symptoms such as chronic diarrhea, steatorrhea, abdominal distention, nausea, malabsorption, anemia and weight loss. It should also be considered in patients with atypical extra intestinal symptoms: dermatitis herpetiformis, recurrent oral ulcers, peripheral neuropathy, memory loss, ataxia, defects in tooth enamel, arthralgia, osteoporosis and infertility (45). Scanning can be performed by serological tests with anti-endomysium Ig-A (EMA) (46), anti-transglutaminase Ig-A and anti-gliadin Ig-A antibodies (47). The first two are more sensitive. False negative results can occur with Ig-A deficiency, commonly associated with CD. In such cases, measurement of titers of antibodies Ig-G is an alternative (48). Moreover, in case of high clinical suspicion, biopsy of proximal small intestine should be performed, since this method is the gold-standard for the diagnosis of CD (9).

The identification and treatment of patients with CD brings many benefits, since it reduces complications such as malabsorption, malnutrition, infertility, osteoporosis, and lymphoma (45,49). Proper treatment also improves absorption of drugs used in associated diseases, such as hypothyroidism (50) and osteoporosis (51). However, the impact of the treatment and control of CD on the risk of developing autoimmune thyroid diseases remains uncertain. Ventura et al. (52) observed that antibodies associated with autoimmune thyroid disease and diabetes tend to disappear with the introduction of a gluten-free diet. Moreover, Mainardi et al. (53) found no association between the presence of thyroid antibodies and treatment of CD. Although data are still controversial, it seems reasonable to consider that a gluten-free diet should be started early, before other autoimmune disorders are established (9).

The prevalence of lactose intolerance in Caucasians differs in the literature, from 7% to 20% of the population. Deficiency of the lactase enzyme may be primary (autosomal recessive) or secondary to disorders of the gastrointestinal tract such as CD. Symptoms result from the fermentation of lactose in the colon, and include abdominal pain, nausea, vomiting, diarrhea, constipation, and weight loss (54). Muñoz-Torres et al. (55) reported a case of malabsorption of levothyroxine associated with lactose intolerance in a 55-year-old female with primary hypothyroidism and persistently elevated TSH levels, despite treatment with levothyroxine (up 900 µcg) and triiodothyronine. She had mild gastrointestinal symptoms, with sporadic episodes of diarrhea for 8 years. When hospitalized, the patient received intravenous levothyroxine with normalization of thyroid hormones. Despite being oligosymptomatic, she was diagnosed with lactose intolerance, and lactose-free diet was instituted. After 3 months, the patient experienced normalization of thyroid function tests.

In recent years, bariatric surgery has been sought by a large number of obese patients, particularly after the development of laparoscopic techniques. Some studies have shown that bariatric procedures and jejunostomy may modify the absorption of drugs, including levothyroxine (54). However, available data are still controversial. Rubio et al. (56) demonstrated that in patients undergoing gastric bypass with Roux-Y technique, absorption of levothyroxine is retarded, but not reduced. Thus, the most appropriate approach to date is individual dose adjustment after surgery (57).

Malabsorption of levothyroxine may also occur after other bowel resection procedures (as part of short bowel syndrome), and some patients may require higher doses of thyroid hormone. But there is no direct relationship between the preserved portion of bowel and absorbed dose of levothyroxine (58).

There are few data in the literature reporting the negative impact of nonspecific inflammatory diseases and intestinal parasites on the absorption of levothyroxine (59-61). Radaeli and Diehl (59) reported the case of a 57-year-old patient with a history of hypothyroidism well-controlled for the previous 6 years, with regular use of levothyroxine. The patient then started to present fatigue, myalgia, cramps, dyspepsia and diarrhea, and blood tests showed mild anemia and serum TSH >100 mUI/mL, despite good adherence to treatment. Parasitological stool examination showed the presence of Giardia lamblia, and after treatment, adequate thyroid hormone levels were achieved.

The prevalence of particular gastrointestinal diseases is increased in patients with autoimmune thyroid dysfunction. When present, those disorders of the digestive tract may be responsible for the need for higher doses of levothyroxine and/or difficulty in controlling hypothyroidism. In fact, in patients where gastrointestinal disease is oligosymptomatic or silent, malabsorption of levothyroxine may be the first symptom. Once poor adherence is excluded as a causal factor, causes for malabsorption of thyroid hormone must be investigated. In those cases, celiac disease, atrophic gastritis, Helicobacter pylori infection, lactose intolerance, short bowel syndrome, inflammatory bowel diseases and parasitic infestations should be considered as differential diagnoses. Proper treatment of these pathologies can then improve control of hypothyroidism, and increase patient’s quality of life.