Ipilimumab is a fully human monoclonal antibody directed against cytotoxic T-lymphocyte-associated antigen 4 (CTLA-4) approved for treatment of unresectable or metastatic melanoma. Blockade of CTLA-4 increases T-cell activation and proliferation, with the potential to manifest unique side effects, termed immune-related adverse effects (irAEs) including dermatitis, colitis, hypophysitis, thyroiditis, and hepatitis. Immune-related events occur in up to 60% of patients, with diarrhea of any grade in 27–31% of patients and enterocolitis occurring in 7% of patients (1). The recommended management of severe toxicity is discontinuation of the drug and treatment with systemic steroids followed by infliximab if systemic steroids are ineffective; oral budesonide alone has been found to be ineffective for preventing toxicity (2,3). Studies that have assessed the endoscopic and histopathologic findings of ipilimumab-associated gastrointestinal toxicities have generally shown changes characteristic of autoimmune enteropathy or active colitis, with only one case of microscopic colitis previously reported (2,4,5). We report a case of a 54-year-old woman with metastatic melanoma who developed lymphocytic colitis after treatment with ipilimumab, which was successfully treated with oral budesonide.

An asymptomatic 54-year-old woman with a history of biopsy-proven, BRAF V600E-positive, metastatic melanoma presented to our institution in December 2014 for further management of her melanoma. Given her excellent performance status and low overall tumor burden, the decision was made to start ipilimumab. She received her first dose of ipilimumab at 3 mg/kg on December 18.

At follow-up for her second cycle on January 12, she endorsed watery stools, abdominal cramping, and tenesmus, all of which had developed one week after her first dose of ipilimumab. Laboratory studies were notable for normal liver chemistries, hemoglobin of 9.9 g/dL, white blood cell count of 7.1×109/L, random cortisol of 8.9 mcg/dL, and thyroid stimulating hormone of 0.72 mcIU/mL. Stool studies were notable for negative fecal leukocytes, negative stool culture, negative exam for ova and parasites, and negative clostridium difficile toxin assay by PCR. A colonoscopy performed January 15 showed normal colonic mucosa and terminal ileum without any evidence of inflammation. Multiple random biopsies were taken from throughout the colon. Pathology results revealed colonic mucosa with intraepithelial lymphocytosis and increased apoptotic activity (Figure 1). There was expansion of the lamina propria by lymphoplasmacytic inflammation and numerous apoptotic bodies with surface epithelial injury and reactive change (Figures 2,3). The findings were thought to suggest lymphocytic colitis although the exuberant apoptosis was unusual in lymphocytic colitis and the differential of drug effect superimposed on typical lymphocytic colitis was suggested. Apart from ipilimumab, she had not started any new medications. Her symptoms had not responded to symptomatic treatment with loperamide and lomotil; on January 23, the patient was started on 9 mg budesonide daily and reported rapid improvement of diarrhea. She was subsequently tapered over 6 weeks and resumed therapy with ipilimumab 4 weeks into her taper. Her diarrhea has not recurred off steroids. 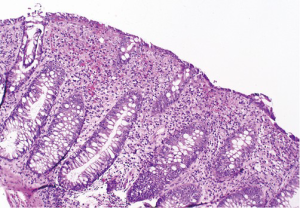 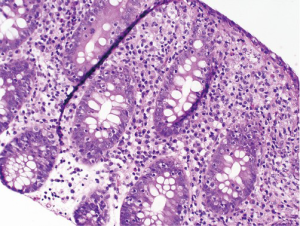 Figure 2 Expansion of the lamina propria by lymphoplasmacytic inflammation and numerous lymphocytes present within the crypt epithelium (H&E, 20×). 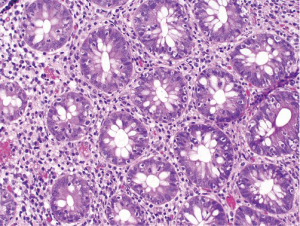 Ipilimumab is well known to be associated with gastrointestinal side effects, with diarrhea occurring in almost a third of patients; however, microscopic colitis is an extremely unusual cause of diarrhea in patients receiving ipilimumab (1). Johnston et al. evaluated a patient with ipilimumab-associated diarrhea using flexible sigmoidoscopy and biopsies and found edematous and ulcerated mucosa with histopathology showing acute and chronic inflammation, cryptitis, and crypt abscesses (6). Oble et al. described a series of five patients who developed severe gastrointestinal toxicity of the stomach, small intestine, and colon. Endoscopic findings varied from normal to diffusely erythematous and ulcerated mucosa, and histology showed lymphoplasmacytic expansion of the lamina propria with increased intraepithelial lymphocytes, increased epithelial apoptosis, cryptitis and glandular inflammation, and villous blunting in the ileal and duodenal mucosa, felt to be most consistent with autoimmune enteropathy (4). Berman et al. evaluated the distal colon and rectum of 115 patients in a phase II trial intended to further elucidate the mechanism of ipilimumab-induced gastrointestinal toxicity, and found the most common histopathologic abnormalities to be active colitis with a mixed inflammatory cell infiltrate in the lamina propria and intraepithelial neutrophils and crypt abscesses. However, intraepithelial lymphocytes were not increased. Furthermore, subjects were randomized to treatment with prophylactic concomitant oral budesonide versus placebo, and budesonide was not helpful in preventing symptoms of toxicity or altering histopathologic findings (7).

Although inflammation of the stomach, small intestine, and colon have been described previously in association with ipilimumab, histopathologic findings consistent with lymphocytic colitis are rare. In the only other reported case to date, Garcia-Varona, Odze and Makrauer describe a 65-year-old male with stage IV ocular melanoma who developed watery diarrhea and abdominal discomfort 6 weeks after initiating ipilimumab therapy. Biopsies from the rectum, sigmoid, and descending colon showed normal crypt architecture but with markedly increased intraepithelial lymphocytes and a diffuse lymphoplasmacytic infiltrate with scattered eosinophils in the lamina propria. The patient was treated with oral and systemic steroids, and symptoms resolved in two weeks despite continuation of ipilimumab therapy (5).

The mechanism of ipilimumab-associated gastrointestinal toxicity is unknown. It may result from depletion of mucosal T-regulatory cells that express high levels of CTLA-4 or from formation of bacterial breakdown products that result in increased inflammatory cell recruitment (5).

In conclusion, we describe a rare case of ipilimumab-associated microscopic colitis in a 54-year-old woman with metastatic melanoma in whom diarrhea resolved with local oral steroid therapy alone. Our limited findings and review of the literature suggest that microscopic colitis may be managed with local steroid therapy and that drug discontinuation may not be mandatory, in contrast to the recommended management of ipilimumab-induced enterocolitis. As ipilimumab gains increasing use in the therapy of metastatic melanoma, as well as other malignancies, the recognition and management of various manifestations of gastrointestinal side effects will be of increasing importance in order to appropriately manage potential toxicities.

Conflicts of Interest: Dr. Salama has served on an advisory board for Bristol-Myers Squibb, and receives research funding through her institution from BMS, Merck, Genentech, Reata, and Celldex. The other authors have no conflicts of interest to declare.

Informed Consent: Written informed consent was obtained from the patient for publication of this case report and any accompanying images. A copy of the written consent is available for review by the Editor-in-Chief of this journal.