An update on the management of intrahepatic cholangiocarcinoma

Together with peri-hilar cholangiocarcinoma and cholangiocarcinoma of distal common bile duct, intrahepatic cholangiocarcinoma (ICC) is a subtype of the cholangiocarcinoma family, contributing to 20–25% all cholangiocarcinoma cases (1). Despite this rarity, it is the second most common primary liver cancer following hepatocellular carcinoma (HCC), accounting to 10% of all primary liver cancer (2). Unlike the more common extrahepatic cholangiocarcinoma, a rising incidence of ICC was observed worldwide. In United States, the incidence had increased from 0.32 per 100,000 in 1975 to 0.85 per 100,000 in 1995 (3,4). Similar rise had been reported in both Far East and the West, such as Japan and United Kingdom (5,6). While some studies attributed it to different classification systems used by the epidemiological analysis (7), this rising trend has been stabilized in the last decade (8). Disease conditions like recurrent pyogenic cholangitis (RPC), choledochal cyst, biliary cirrhosis, primary sclerosing cholangitis (PSC), biliary papillomatosis/adenoma, alcoholic liver disease and parasitic infestations are known predisposing factors for development of ICC (9). Although diabetes mellitus, hepatitis B/C infection, nonalcoholic steatohepatitis, chronic pancreatitis, obesity and smoking are suggested to be associated with ICC (10), many ICCs are developed de novo without any of the above factors (11,12). Histologically, ICC can be classified into three distinct subtypes: mass-forming, peri-ductal infiltrating and intra-ductal growth (13). Mass-forming ICCs are the most common subtypes and have the propensity of intrahepatic metastasis; peri-ductal infiltrating confers the worst prognosis with its tendency to disseminate via hilar lymphatics.

Since most of the ICC developed at the periphery of the biliary tree, obstructive jaundice is uncommon and most patients present late due to its insidious onset (14), around 12–30% of the ICC were diagnosed in asymptomatic patients (12,15) and curative surgery is possible only in about 40% of the patients (16). Cancer antigen 19–9 elevation might be found in some of the patient but it is not diagnostic (17). Tumour biopsy with the use of immunohistochemical tests such as a positive cytokeratin (CK) 7, negative CK20, negative transcription termination factor RNA polymerase (TTF1), negative deletion in pancreatic cancer, locus 4 (DPC4) and negative caudal type homeobox2 (CDX2) are evidence support the diagnosis of primary ICC (18). Tumour biopsy is usually reserved for inoperable disease as the sampling process might risk needle tract and peritoneal seedling.

Cross-sectional imaging remains the most important investigation modality for ICC. The proportion of tumour cells and fibrous tissue possessed by the tumour would affect its enhancement pattern and appearance on CT scan (19).

The typical CT features of a mass-forming cholangiocarcinoma include homogeneous attenuation, irregular peripheral enhancement with gradual centripetal enhancement, capsular retraction, the presence of satellite nodules, and associated intra-hepatic ductal dilatation around the tumour (13,20-23). If ICC developed in background RPC, there may be co-existing hepaticolithiasis, dilated intrahepatic duct, atopic hepatic parenchyma and thrombosed portal vein to the diseased lobe (24). For peri-ductal infiltrative ICC, it appears as enhancing peri-ductal thickening around a dilated or narrowed intrahepatic bile duct without mass formation resembling that of infiltrative hilar cholangiocarcinoma (23). In case of intra-ductal type, it can have five imaging patterns, namely diffused and marked ductal ectasia with or without visible mass, intra-ductal polypoid mass within a dilated intra-hepatic duct, intra-ductal cast within a dilated duct and focal stricture associated with proximal ductal dilatation (25). However, due to presence of surrounding fibrous tissue, there is limitation for CT to delineate the extent of carcinoma and resectability can be determined in only 60% of the cases (26); another shortcoming of CT scan is it may not be able to differentiate PSC and ICC (27). ICCs are typically hypointense on T1 weighted and hyperintense on T2 weighted imaging in MRI. Peripheral enhancement and progressive concentric filling would be seen in delay phases of contrast MRI (28). However, some of the ICC exhibit atypical imaging features and by the same token, there are a number of mimickers for ICC. In cirrhotic patients, HCC with cirrhotic stroma, sclerosing HCC and cholangiohepatocellular carcinoma could have nearly identical imaging characteristics as ICC (29-31). Recent studies suggest that, use of a new liver specific MRI contrast, Gadolinium ethoxybenzyl dimeglumine, also known as gadoxetate disodium, can increase the conspicuity and better delineate characteristics of various liver tumours (32,33).

Fluorodeoxyglucose (FDG)-PET has a specific role in the management of ICC, some studies reported a high sensitivity and specificity of 85% for diagnosis of ICC (34,35), and small cholangiocarcinoma of 1 cm can also be detected, despite this is less sensitive in presence of inflammatory process or infiltrative type ICC (34,36,37). In addition, FDG-PET is more specific in picking up regional lymphadenopathy than CT scan, though it is not more sensitive (35,38).. While at most of the time, FDG-PET reveals a “hot” spot in the liver and do not differentiate ICC from other tumours, some investigators reported that FDG-PET can change the management of up to 30% of the patients with ICCs by detecting metastatic diseases (35,39,40). Therefore, FDG-PET should be considered in patients with systemic symptoms or locally advanced tumour.

Staging system plays an important role in prognosticating and guiding treatment of ICC. In 1997, The Liver Cancer Study Group of Japan (LCSGJ) first advocated an independent staging for ICC from HCC (41). There were two Japanese systems proposed by Yamasaki (13) and Okabayashi (42) respectively. The former one staged ICC by solitary tumour size cut-off at 2 cm, venous invasion and presence peritoneal metastasis while the other one employed presence of symptoms, lymph node metastasis, multifocal tumour, vascular invasion and peritoneal metastasis for staging. Outside Japan, AJCC/UICC classification is commonly used. Like the classification in Japan, size of tumour remains an important factor to assign the T-staging in sixth edition AJCC/UICC (43). However, since this system was derived from data largely based on HCC patients, and due to the differences in carcinogenesis mechanism and tumor biology between HCC and ICC (44-48), AJCC/UICC sixth edition was criticized to be lacking of discriminatory ability. Subsequently, a large SEER cohort performed in 2009 (49) demonstrated that tumour size is not associated with long-term survivals. The simplified staging system proposed was noted to have better discriminatory ability than AJCC/UICC sixth edition and superior discriminatory power when compared to Japanese staging systems (49). Based on these findings, the T-staging criteria in the latest AJCC/UICC seventh edition (50) exclude tumour size. In addition, a number of studies (45,49-57) validated the prognostic significance of vascular invasion and multiple tumour; with the latter being regarded as a worse parameter by some authors (52,53). Apart from the newly added criteria of peri-ductal infiltration as T4 disease, tumour involvement of regional lymph node is currently regarded as stage IVa disease instead of stage III disease as in the sixth edition. This is because the impact of lymph node metastasis on survival is even stronger than that of the vascular invasion and multifocal disease (58). Some studies suggest the number of lymph node metastasis (49,54,59,60) and the ratio of positive lymph node to examined lymph node (54) have implication on prognosis. However, there is no sub-classification of the extent of lymph node metastasis in the AJCC seventh edition, albeit, this staging system is externally and independently validated by the French Surgical Association (AFC)-IHCC 2009 study group and hence recommended for both clinical and research purposes (61).

Resection remains the only hope of cure in patients with ICC (62-64), but for a multitude of reasons, R0 resection (macroscopic and microscopic negative margin) is only achieved in 32% to 96% of the cases (15,52,55,58,60-62,65-69). Intrahepatic metastasis and peritoneal deposits are some of the reasons for unresectability, some studies suggested that diagnostic laparoscopy can save unnecessary laparotomy from 27–36% of the cases (66,70). However, other studies reported that the sensitivity of staging laparoscopy in only 55% (66) and a high false negative rate (70). Furthermore, many of the unresectable cases are due to major vascular invasion or contralateral biliary system involvement that could only be confirmed with surgical dissection. Therefore, staging laparoscopy could not be recommended as a routine until further convincing data emerged.

Resection of ICC needs to be aggressive in order to obtain the best oncological outcomes (65,71,72). It has been suggested that, for mass forming type of ICC, operation should follow the principle of anatomical major hepatectomy, while for infiltrative types ICC, extrahepatic bile duct excision and lymph node dissection should be performed (73,74). Extended hepatectomy, bile duct reconstruction and vascular resection are frequently required, reported as up to 78%, 29% and 14% respectively (15,55,60,66,67,69,75,76), despite the complexity of the surgery, the reported morbidity and mortality in some centers can be as low as 6% and 1% (10,49,55) respectively. Therefore, hepatectomy for ICC is best to be performed in high volume center (77).

Advances of surgical technique and perioperative care allow many challenging ICC to become resectable, however, the prognosis for this group of patients remains poor with 5-year overall survival (OS) less than 40% in most recent series (Table 1). Regional lymphadenectomy and wider resection have been the area of active research in the hope that the survival could be further prolonged. Routine lymphadenectomy could theoretically enhance oncological clearance (74,80) and optimize pathological staging, however, the counter-argument is lymph node dissection does not seem to influence ultimate survival of ICC patients (57,81,82). While strong evidence is lacking, lymph node dissection is sensible when there is gross regional lymph node involvement. Concerning the resection margin issue, there is little controversy about the benefit of clear resection margin (52,60,62,66,83,84), the definition of adequate margin width remains a topic of debate (85-88). We had recently reviewed our patients who has resection for ICC and found that margin width tends to be more important in patients who have solitary and node negative tumour, this finding is echoed the another study by Farges et al. (84). 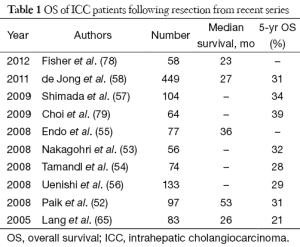 Transarterial chemoembolization (TACE) and transarterial radioembolization (TARE) are established treatments for unresectable HCC without extrahepatic disease. Despite these treatments were intrinsically designed for hypervascular tumours like HCC, it has been applied to ICC. A number of case series has suggested TACE/TARE possess satisfactory safety profile and efficacy with response rate of 70–86% and median survival ranging from 11 to 13 months (99-101).

External radiotherapy could be given to patients with unresectable ICC hoping to provide local control and prolong survival. A 36% response rate was reported for patients who receive a median total of 50 Gy given in 2 Gy per section 5 times a week (102). In order to minimize radiation exposure to the normal liver tissue, stereotactic radiotherapy technique can be used (103). A study reported that, with the use of lower radiation dose 30 Gy, the disease control and median survival after receiving stereotactic radiotherapy was 55% and 11 months respectively with significant toxicity was observed (104). Adjuvant radiotherapy after curative surgery was shown by a retrospective series to be better than surgery alone (105). However, before the emergence of higher level of evidence or further clinical studies, adjuvant radiotherapy should be recommended in selected patients, i.e., positive margin, or nodal disease (106).

Being a mediator of hepatic inflammatory process, cholangiocyte is equipped with the ability to initiate and maintain carcinogenesis, making cholangiocarcinoma inherently resistant to chemotherapy (107,108). Response rate for classical single agent gemcitabine is at best 30% with median survival of 5–14 months (109-114). As proven by some clinical trials, combining gemcitabine with platinum group chemotherapeutic agent can increase response rate to up to 50%, and median survival of the patients was also prolonged (115-117), such that combination gemcitabine and oxaliplatin/cisplatin has become the standard chemotherapeutic regime in many centers. Furthermore, advances in bioinformatics would allow more oncogenes taking part in the carcinogenetic pathway for ICC to be identified (118); further clinical trials focusing on combination chemotherapy with targeted therapy are expected to be emerging (119-121).

ICC is an uncommon and sinister hepatic malignancy. Predisposed patient groups should be offered surveillance with sophisticated imaging modalities. Diagnosis at early stage with aggressive surgical resection remains the only hope of cure in a small proportion of the ICC patients. Various non-surgical treatments are available but the prognoses are generally guarded. Further clinical trials focusing on newly chemotherapeutic and molecular targeted regimen are early awaited.

Conflicts of Interest: The authors have no conflicts of interest to declare.