Cholangiocarcinoma is a tumor that arises from the malignant transformation of the epithelial cells of the intrahepatic or extrahepatic bile ducts. This type of liver cancer has very poor prognosis and is extremely aggressive with symptoms unobservable until there is a blockage of the bile duct by the tumor. Treatment of cholangiocarcinoma by chemotherapy and radiation therapy is not very effective; leaving surgical resection of the tumor as the only treatment option. Further study of the factors that lead to tumor initiation, promotion, and progression is necessary to be able to design alternative treatments for this devastating illness. The tumor microenvironment is a very important factor in the regulation of tumor angiogenesis, invasion, and metastasis; however, the mechanisms by which these events are regulated remain mostly unknown. The goal of this review is to discuss the current knowledge about the role of the tumor microenvironment in the pathogenesis and classification of cholangiocarcinoma as well as recent advancements in the development of therapies directed at the tumor microenvironment.

Cholangiocarcinoma originates from the neoplastic transformation of cholangiocytes into intrahepatic, perihilar, or distal extrahepatic tumors (1). Usually, cholangiocarcinomas are adenocarcinomas and have poor prognosis with restricted treatment alternatives. This is partly due to the late onset of symptoms and relative resistance to the therapies currently available (2).

The tumor microenvironment is made up of neoplastic epithelial cells, a biologically complex stroma constituted of various types of stromal cells and the extracellular matrix (9). Stromal cells, particularly inflammatory cells, vascular endothelial cells, and fibroblasts, have been shown to actively support tumor growth in murine models of tumorigenesis (10-13). Additionally, the microenvironment has been shown to play a role in neoplastic transformation, progression, metastasis and invasion of cancer cells (10,13). Also, resistance to radiotherapy and chemotherapy is influenced by the interaction between the cancer cells and the tumor microenvironment (14,15). There is evidence that shows that the interaction between the cancer cells and stromal cells of the microenvironment is bi-directional and dynamic. Neoplastic cells can secrete factors that recruit and activate stromal cells into the tumor microenvironment in a paracrine fashion. Stromal cells that have been recruited and activated can then release factors into the extracellular milieu that can stimulate or inhibit tumor growth (16-18). Vascular endothelial cell proliferation and recruitment leading to the formation of new blood vessels provides the tumor with the nutrient supply necessary for its growth and metastasis. Cancer-associated fibroblasts can stimulate angiogenesis as well as promote tumor growth and invasion. The immune cells present in the tumor microenvironment, tumor-associated macrophages in particular, can confer resistance to toxic insults in addition to promoting growth. Finally, the proliferation of lymph endothelial cells leading to the increase in lymphatic vessel density can promote tumor metastasis (Figure 1). The individual roles of the components of the tumor microenvironment in cholangiocarcinoma will be further discussed below. 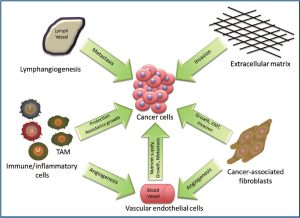 Angiogenesis is defined as the physiological process by which new blood vessels are formed from pre-existing ones. Formation of new blood vessels is necessary to supply nutrients and oxygen to support tumor growth (19). Angiogenesis is accomplished by the organized release of angiogenic factors from the tumor cells, such as vascular endothelial growth factor (VEGF), epidermal growth factor (EGF) and fibroblast growth factor (FGF). These angiogenic factors bind their receptors on the endothelial cell surface leading to augmented vascular permeability, which results in the extravasation of plasma proteins and the dissociation of pericyte coverage (20,21). Endothelial cell proliferation and migration to initiate the formation of new blood vessels follows (22). Localized degradation of the extracellular matrix is a necessary step in the formation of the new blood vessels. This degradation is executed by the matrix metalloproteinases, cathepsin B and other degradation enzymes, in addition to increased matrix protein expression including fibronectin and laminin (23-25). Tumor cells or cancer-associated fibroblast are the main source of these essential extracellular matrix proteins (17). 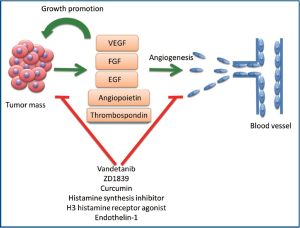 Under homeostatic conditions, fibroblasts have a low proliferative index and secrete factors necessary to maintain a normal physiological state. Normal fibroblasts provide biochemical signals that restrain epithelial tumor cells within their basement membrane (44,45). As a result of tissue injury, stromal cells quickly and transiently alter their phenotype and proliferation rate. In tumorigenesis, the normally reversible wound healing response lacks the regulatory mechanisms that allow it to return to normal homeostasis. Thus, stromal dynamics are altered because of this lack of downregulation. Tumordependent changes in signaling and plasticity of the stroma elicit alterations that result in a ‘primed’ stroma capable of supporting and inciting tumor initiation or progression (45). 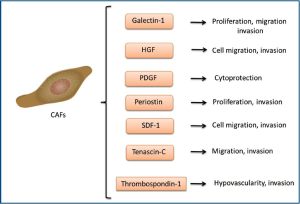 Tumor initiation and progression are intimately related to inflammation and the immune system. A major risk factor for the development of various tumor types is chronic inflammation of the target organ. Within a tumor, tumor-associated macrophages (TAMs) are the primary immune cell found. Macrophages have the ability to secrete pro- or anti-inflammatory mediators depending on the stimuli (57). Macrophages activated with TNF-α have anti-tumor activity and signal tissue destruction, this is known as an M1 phenotype. The M2 phenotype characterized by the initiation of tissue repair, remodeling, and tumor promotion can be induced by interleukin-4 activation (58). Most TAMs are the M2 phenotype, as a result of multiple signals expressed within the tumor microenvironment which include interleukin-10, transforming growth factor-β, and colony stimulating factor-1. These immunomodulatory signals have been reported to be secreted by myeloid-derived suppressor cells, IL-10+ B lymphocytes, Th2 helper T cells, and the tumors themselves (57). Alternatively activated TAMs have reduced anti-tumor activities, and increase the production of angiogenic mediators that include VEGF and IL-10, in addition to M2- specific genes known to be involved in the promotion of cell proliferation. These events are summarized in Figure 4. Strategies that inhibit the M2 phenotype and induce M1 signals can reestablish the anti-tumor functions of TAMs and aid in the removal of protective signals that originate from the M2-TAMs, perhaps activating the innate immune response thus leading to a reduced tumor size (57,59).

Chronic inflammation and cholangiocarcinoma seem to be intimately related (60). Cholangiocarcinoma cells are known to overproduce many inflammatory cytokines, however, IL-6 is the most studied to date (61). How TAMs are involved in cholangiocarcinoma development and progression is still unclear. Recent studies have shown that the density of infiltrating macrophages (stained for MAC387, a specific macrophage marker) was high in more than half of the studied tumor samples. This high density of MAC387-positive cells correlates with poor survival rates, despite the lack of evidence that the MAC387-positive cells are of the M2 phenotype (62). Cholangiocarcinoma patients have increased circulating CD14+/CD16+ monocytes, which are thought to be precursors of resident macrophages. This increase correlated with the higher density of MAC387-positive infiltrating macrophages. Additionally, the circulating CD14+/CD16+ monocytes expressed higher levels of angiogenic factors that include VEGF and CXCL3 (63). In an a separate study, it was found that M2 macrophages infiltrate intrahepatic cholangiocarcinoma (stained for CD163, an M2 marker); their number closely correlates with neovascularization and infiltration of FOXP3+ regulatory T cells. This study also found that treating macrophages in vitro with the supernatant from CCA cells lead to macrophage polarization toward the M2 phenotype and secretion of VEGF-A, IL-10 and TGFβ (64). Collectively, these data support the hypothesis that TAMs may play a role in cholangiocarcinoma progression. However, the regulation of the crosstalk between M2 TAMs and cholangiocarcinoma cells is not understood and needs to be further studied. 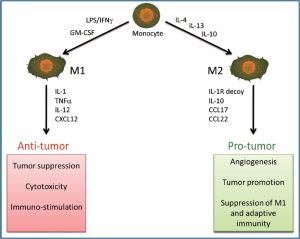 Tumor metastasis is a major cause of the lethality present in this disorder and the spread of tumor cells generally occurs through lymphatic vasculature. In the lymph nodes, a higher incidence of tumor foci is found which leads to an unfavorable prognostic factor in most cancers. Previously, it was thought that the spread of tumor cells via the lymphatic system was a passive process where detached tumor cells would enter pre-existing lymphatic vessels in the tumor area (65). We now know that new lymphatic vessels are formed in the tumor microenvironment and that this correlates with lymphatic metastasis (66). Lymphangiogenesis is regulated by growth factors similar to those that control angiogenesis. VEGF-C and VEGF-D are secreted from the tumors and in turn activate VEGFR-3, which is expressed on lymphatic endothelium (67). VEGFR-3 activation induces the proliferation of lymphatic endothelial cells in vitro and the formation of new lymphatic vessels in vivo (68,69). Additional lymphangiogenic factors include VEGF-A, fibroblast growth factor-2, angiopoietin-2, and platelet-derived growth factor-BB (70-73).